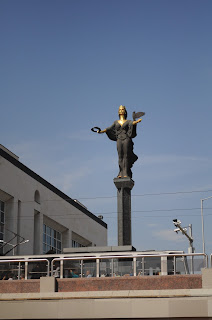 I felt that someone was trying to wake me up and asking me for something, when I opened my eyes, realized that the train had reached the Bulgarian border and the person waking me up was the immigration officer.  Went back to sleep after he handed over my passport after looking at it, I didn't know whether he stamped anywhere in my passport or not.  I couldn't sleep longer because within a couple of minutes, another person came over asking for the passport and when I handed over the passport, to my shock, he put the passport in a plastic bag and left.  All this was happening when the train was stopped and after my passport was taken, I couldn't go to sleep.  I waited for about 15 minutes for my passport to be returned before getting worried about it and walked out of my room, started talking to the guy in the next room about his passport (Japanese) and he's worried about it too.  This guy had been travelling for the last six months from Japan and visited a number of countries like India, Malaysia, Singapore, Romania, Balkans, etc.,  and planning to spend the next six months backpacking around Western Europe and Russia.  The train had been standing in Ruse, Bulgaria for more than hour and still no sign of our passports - Since more number of us was waiting for the passports, I was not worried about it much. 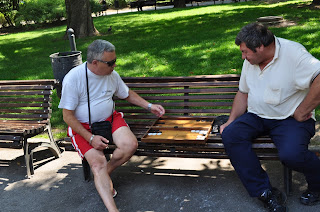 Finally, there's a guy came over to our compartment with a bunch of plastic bags trying to pronounce Asian names by looking at the passports.  In some cases, we had to point to him which one was our passport before he could check our faces and delivered the passports.  I wished that I had known about (non)process Bulgarian immigration beforehand but it was totally different from any other immigration done anywhere in the world, most of the places you'll normally get out of the train to go through the immigration process where you could still see the passport being processed...here, from the collection to delivery process is pretty scary.


Where is the Tour 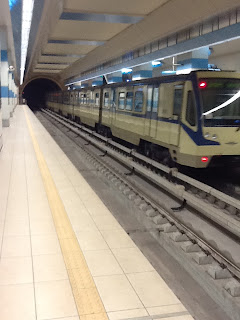 The plan is to go to the Palace of Justice before 11am to join the walking tour of Sofia but the train reached Sofia at 1030am, one hour later than it's supposed to.  The train station is pretty antique (even with developing country standards) for a country's capital.  I couldn't find the Information desk to figure out where the Metro station is or how to get to the Palace of Justice...luckily the girl from Estonia was helpful and took me to Metro station before they go on their way to their destination.  The Metro is pretty new, just less than two years old, and looked really good.  The person at the Metro counter didn't speak English, but very helpful and showed me in the map where I needed to get down for the Palace of Justice.  After getting the tickets for almost to nothing price, while waiting for the train, trying to figure out where I needed to get out and how to get to the start of the walking tour - but reading the name of 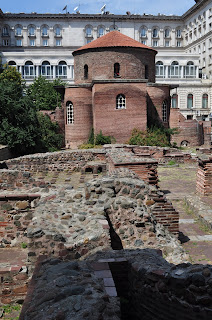 the places in  Cyrillic script was really confusing.  Now I could understand what would happen to the travelers in India if there's no English names are listed with the local language names ;-)  Started talking to the girl who was waiting for the train and asking where to get down, how to get to my destination, etc.  She was very fluent in English, after some more conversation found out that she lives in Boston and visiting the family in Sofia.  When asked her where she went to school, she mentioned that she's a Razorback and did architecture degree from University of Arkansas, Fayetteville - where I did my graduate degree.  After that our discussions were about Fayetteville and the school before boarding the train.  More people in Bulgaria spoke English than in Romania so going to places in Bulgaria is not difficult if you are not shy asking directions from others ;-)  But reading the map and going to places was pain.

I was able to make it to the start of the walking tour on time and there's a huge crowd for the tour, so we had to wait for the additional guides for the tour.  I'll strongly recommend going on the walking tour if it's available in the cities you visit, because it is given by the locals and you'll get to learn local politics or reasons behind certain structure, etc.  During the tour, we were able to witness the protest against the President of the country; the guide was translating what they're saying and the background of the protests as well as the counter protests.  The number of people protesting during the summer months were low because everyone was at the mountains or in the beaches.  Sofia is a small place with 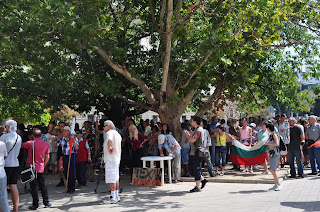 most of the attractions around the Metro station near the statue of St. Sofia.  After the walking tour, got some beer from a super market and enjoyed the cold beer in the hot day in a local park watching the local scene.  Found a nice soup place that had some vegetarian options as well as wifi so that I could check-in for my flights and get an accommodation for a night in Istanbul, near the ferry station where I had to pick up my daughter. 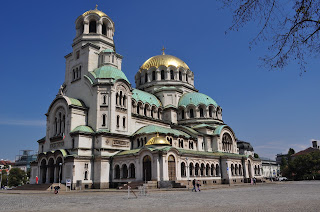 I retraced the path of the walking tour to explore the attractions in much more details before heading to the bus stop to catch the bus to the airport.  I got pretty much tired and bored after walking around for two hours and went to a restaurant near the university to relax before I was ready to catch my bus.  The bus stops are very marked and I got the tickets to the airport at the University Metro bus counter because I didn't find any ticket booths around the bus stops.  Sofia airport is small and pretty easy to get to by the bus, only thing that you need to figure out before getting in the bus is which terminal that you need to get off and there's no clear sign at the airport about the airlines and terminals.

Sofia is a pretty small place without any great architecture or any major attractions in the city but there're very close by mountains where one can go to enjoy.