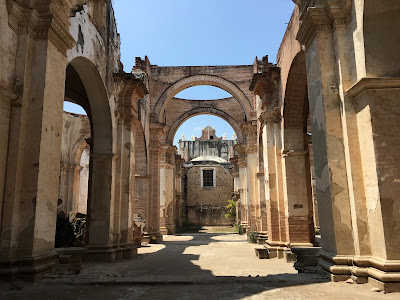 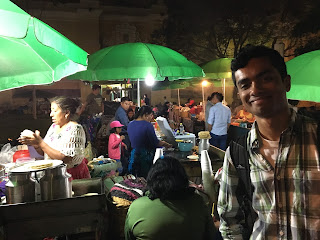 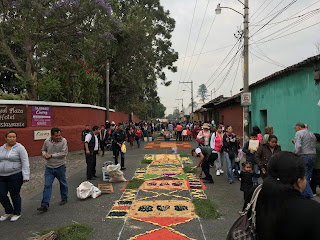 Places that we visited in Guatemala - Antigua, Tikal and Lake Atitlan 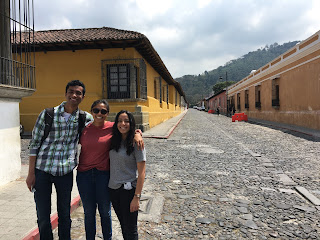 City.  On top of it, everyone has to go through the immigration and customs even if you are a transit passenger and the lines for the immigration were pretty long.  Just 20 minute before the flight departure, I had to cut in front of the immigration line to make it to the flight on time (last one to check-in).
Guatemala City airport is pretty small and getting out to find shuttles to go Antigua is pretty simple.  But booked a private taxi with Yashkin and he was prompt.  His dad was a German passport holder so he gets the German passport, which enabled him to work in Germany for more than 6 years before returning home to run his own business. 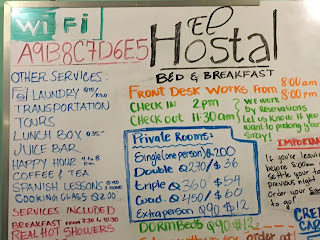 El Hostel, the place where we stayed, was couple of blocks away from the Central Park area and it’s a pretty nice hostel to hangout to make new friends.  The breakfast at the hostel was pretty good.  We hung around talking to a friend from Canada (Joans) before went to the Central Park.  The Tourist Information center on the way provided very good information. 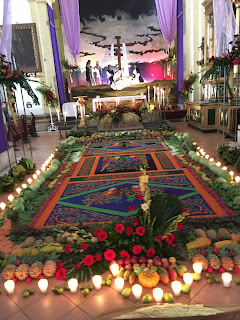 Walked around the Central Park that was busy with a lot of activities and visited the Saint Joseph cathedral at the center, which was destroyed by the earthquake.  That church must be one of the impressive structures at that point in time.  The church at the Central Park had decorations for Easter and had a massive “alfombra” (street decoration) in the main hall.  There’s also some celebration happening in the church and the music was great.

After getting some mango slices from the street side vendor for the afternoon snack, walked towards the Santa Catalina arch and beyond.  We walked to the local market but there’s nothing interesting, so went back to the hostel.  We couldn’t go to the Pacaya hike the next day because of the festival in town.

Part of the festival during the weekend, there’s a procession from the San Francisco church from where small kids, under 10 yrs., were carrying Jesus and Marry in the floats.  Some kids were happy to be in the procession and some were not.  All of the kids and adults who were participating in the procession were dressed up in black robes and carrying incense.  The whole street was very smoky with the incense. 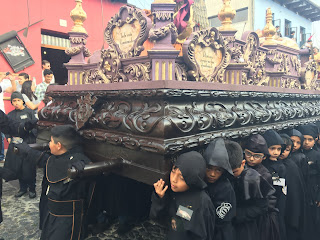 People started to decorate in front of their homes/businesses with “alfombra”s around 10pm and we waited for more than two hours to capture the progress of the artistic work but got tired and came back to the hostel :-( 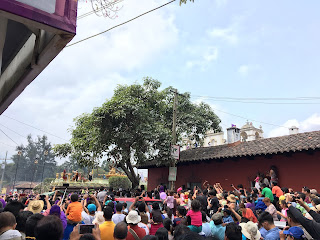 Teenage boys carried Jesus and teenage girls carried Mary floats, and the whole procession path was filled with a lot of incense smoke.  It’s a very colorful procession with people carrying the floats in the black robes and a lot of indigenous people in their colorful dresses.
We were totally impressed with the number of volunteers keeping the place, packed with a lot of people, very clean and as the floats passed over the decorations, the cleanup trucks cleaned it up immediately. 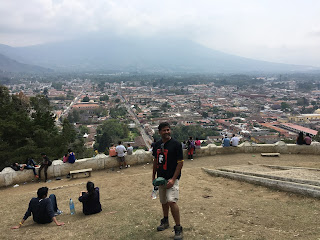 After having coffee in one of the cafes, where we met a few of Sharada’s friends from USC, we headed to the hill to have the panoramic view of the city.  The hike to the hill was petty easy and short, but the view was good.  There’s police everywhere in the city and in all of Guatemala we always felt safe. 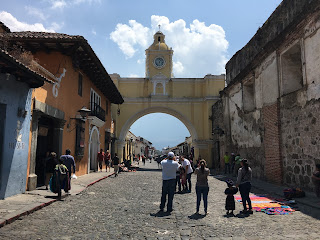 was going all over the city.  The procession started at 6am in a near by village and ends in the Central Park at 6pm.  There was live music at the city park in the evening because that’s the end point for the procession and the whole city was in a festive atmosphere and the ATMs were running out of money J Getting out of the city to the Guatemala City Bus stand in our shuttle took more than 2 hours because of the terrible traffic.
The bus stand is in Una Zona (Zone 1) in the Guatemala City, which is supposed to be one of the bad neighborhoods, but we felt pretty safe in the bus stand.  A few tourists ventured out to the neighborhood McDonalds to get their dinner and returned without any issues, but we didn’t want to take any risk.  The bus was on time and the bus ride was comfortable, good and freezing :-). 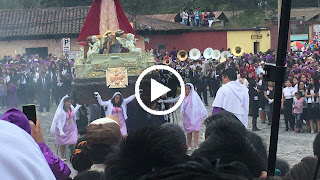