We sent the pictures of our driving license to the motorcycle 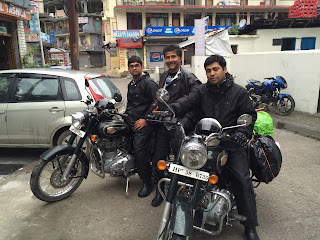 renting place so that he could get the necessary permits for the trip to Leh.  We got this permit on the Independence day, so the permit office never closes, I guess.

New Manali is very crowded and mostly shopping but heard that the old Manali is a better place to hangout.  If you have spare time, go to the Old Manali.

Renting the bike took more than two hours because involved testing the vehicle, getting the necessary paper work, getting the right size helmets, etc. 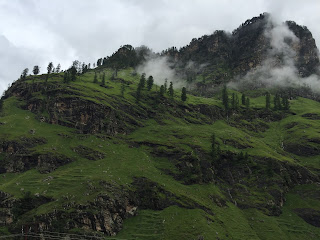 Since I traveled from Leh to Srinagar and Manali to Leh, I could confidently say that the road from Manali to Leh is more scenic, especially the the Jispa valley area is really awesome.

Rain boots and tarpaulin sheets to cover your luggage are very essential for the trip.  You won’t be able to predict the weather (as any mountain weather is not predictable), so plan to wrap your luggage so that you don’t have 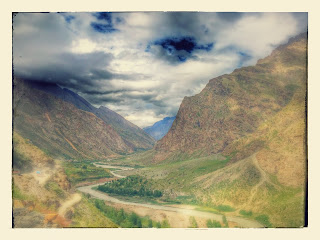 run out of warm cloths.  If you don’t have waterproof gloves, get a few surgery gloves to wear on top of gloves to make it waterproof.

Pack whatever you need for the next day or two on your ride to Leh in a smaller bag that can be easily accessible.  Unpacking and repacking the whole luggage is a time consuming thing.  Take a kerchief to cover your nose and mouth, the road after Zing Zing 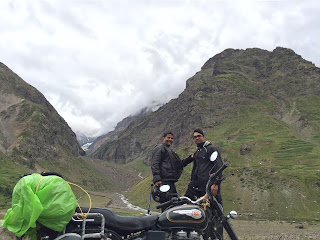 Bar gets more dusty and the trucks generate so much fume, covering your nose/mouth will be a better thing to do.

Unless you are a hardcore bike rider, I would suggest riding one way from Manali to Leh and return back to your home from Leh.  The better option is to ride from Srinagar to Leh and then Leh to Manali, both these options will cost you additional drop off charges.

Big salute Border Road Organization (BRO) for keeping the road as good as it is based on the remoteness and rugged condition of the landscape.  Heard from the driver that they are building a tunnel to avoid the Rohtang pass which will enable year around travel along this route. 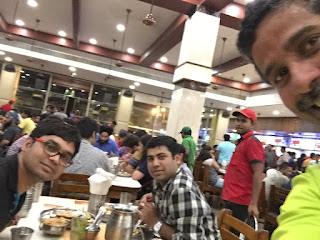 On the way to Manali from Delhi the driver wanted to stop the car for chai in a famous daba in the outskirts of Delhi.  When we stopped at the daba at 2am, I realized that it’s not a regular daba but a special place that could accommodate about 2000 people at the same time.  We had to wait for 10 minutes at Amrik Sukhdev before getting a table.  We decided to have dinner there instead of just having a chai because we wanted to enjoy the party scene.  The crowd was going wild and shouting every time when the electric power went off for a fraction of a section and came back.  Couldn’t believe that the the city was active at 2am. 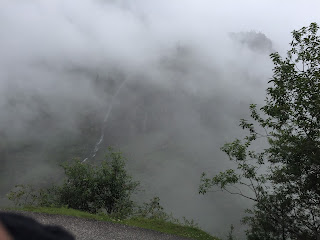 packing and waterproofing our luggage took more time, and we left the hotel around 7am.  We had to come back to hotel within 5 minutes to collect the oil bottle that we left in the hotel.  As soon as we left Kothi after our leisurely breakfast, the rain showers started and continued until we reached the Rohtang pass, by that we were wet and cold.  It was completely cloudy, rainy and the visibility was bad, but the roads are reasonably good except in a few places before Kothi (where one of us almost fell down). 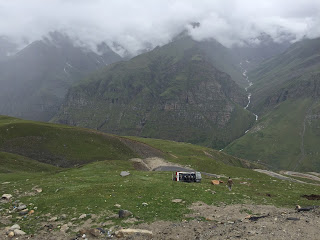 We noticed a few people taking oil from a rolled over tanker in the Rohtang pass.  After having some hot coffee in Rohtang pass, we started to continue our trip.  We continue to discuss whether to make the trip in two days or take three days.  The roads started to get worse after the Rohtang pass and we had to cross a few water runoff on the road.  One of our friends almost 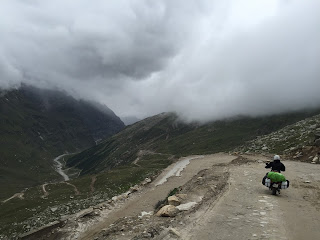 dropped the bike in the water in one such crossing but managed to save. Coming down from the Rohtang pass was a very bad in a mud road for about 20km.

Keylong is the only place in the highway that has some concrete hotels/guest houses and in other places on this road, all of the stays are in tented camps.  So don’t assume that Sarchu or Pang will have good hotels, they have only tented accommodations.  Knowing of Sarchu mentioned in a number places, we expected that it’d be bigger town but it is not.  Since we reached Jispa earlier, around 4pm, we thought that we could go still further to stay in a place called Zing Zing Bar without realizing that it’s in a higher elevation than Sarchu.  This place was recommended by one of the taxi driver that we met on the way.


No Bar in Zing Zing Bar 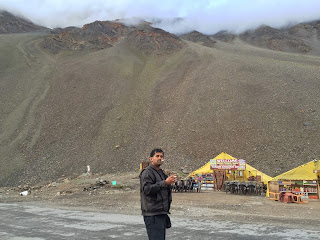 Zing Zing Bar is located in a nice place with beautiful views but there is no bar only tented campsites.  Since none of us realized that it’s in a higher elevation than Sarchu, we did feel better except one of us who felt little giddy so went to take rest.  We met two guys in the ZZBar who were returning from Leh about the road conditions to Sarchu and they recommended that we don’t continue our ride to Sarchu but to stay in ZZBar because of the bad road conditions and storm conditions at the Baralacha La pass.  Since we were already wet and cold, we didn't want to take the risk of going through the storm late in the evening.  But the next day on our ride to Sarchu, we found out that the roads were not as bad as those guys mentioned and there's no sign of rain either.

We booked three beds for Rs. 150/each for the night and went to 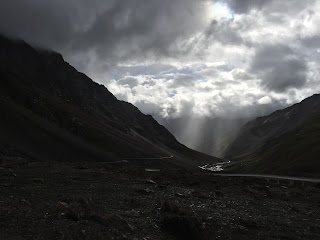 sleep around 9pm after dinner in the tent.  Surprisingly, the weather was not that cold.  After the open air toilet in the morning (that my friends refused to use the toilet paper and decided to wait for the proper restroom) with the beautiful view of the sunrise and waterfalls, we left for Leh around 7am. 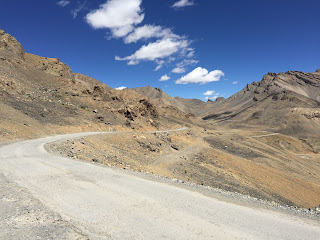 Today, we were crossing four passes, Baralacha La Pass (16,500 ft), Nakee La Pass (15,500 ft), Lachulung La Pass (16,600 ft) & Tangland La Pass (17,400 ft), and every time you cross the pass, the roads gets very tricky.  We had more water crossings ’til we reached Pang and the roads after Pang were pretty good.  But until we reached Pang we had tough time overtaking the trucks and navigating in the water runoffs.  After experiencing going down 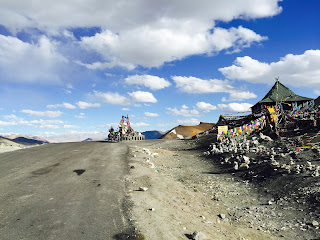 with the bike that I was pillion a couple of times (luckily no major injuries), I gave up the idea of riding the bike in that road.  The scenery from ZZBar to Pang and beyond is breathtaking, the camera couldn’t capture the true beauty of the scenery.  There’s not much civilization on the Manali highway(!) to Leh.

We stopped at Upshi around 7pm for dinner and discussing whether 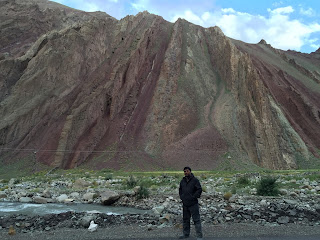 to continue to Leh but unfortunately the headlights in one of the bikes was not working so we gave up going to Leh that night (after riding about 10miles with the help of the headlights from the other bike).  The next day morning we left early to Leh and arrived Leh around 9am.  Except the first day rain, we had a perfect weather in the second day.

We parked our bike in Leh and decided to rent a car to go around to save time and energy. Both the riders were tired of riding. 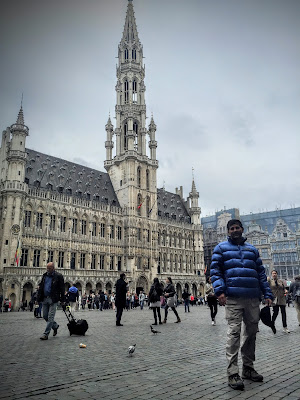 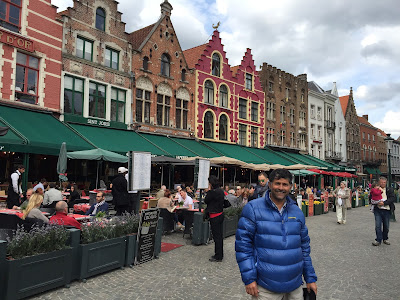 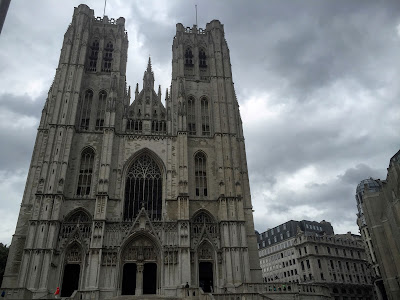 Struggled to get to the correct platform to catch the train to Brussels North and after leaving the Brussels North station, I had trouble getting to the bus station within the metro to get to a particular bus number.  Initially, I thought that it was a language issue but I can assure that it is not the case.  There’s no proper direction or maps in the train or metro stations.

When I booked my apartment through AirBnb, I didn’t realize that the apartment was in the Elsene section, it is one of the areas where most of the migrants from North Africa and Turkey live.  The information about that area in some of the forums was pretty negative, but my experience I really enjoyed staying there and I walked around that area about 11pm without any issues.  There’s a police station just a block away from where I stayed and didn’t see any sketchy characters hanging around.  I was staying with a nice couple (French and Greek) who are ballet dancers and teachers who invited me to join them for a drink later that evening.  I joined them for a drink the next day when we talked about their profession, my work, capitalism in US, US work hours, etc.  It is a nice place where they provide me with good breakfast and a lot of advise on what to do in Brussels. 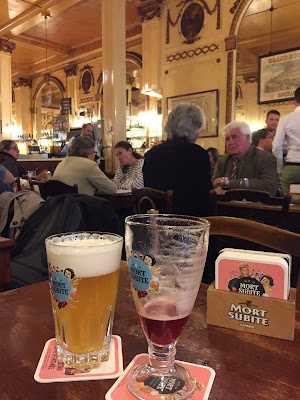 Even though it was a cold and gloomy day, I didn’t want to stay in the house so ventured out to
explore Brussels.  Brussels is relatively a small city and you can walk to most of the touristy places by walk.  Before I left the house, I checked with the hosts on the security situation on the streets after dark and they told me that there won’t be any problems in that neighborhood.  I was able to walk around in a leisurely pace and cover most of the touristy areas before went for beer in one of the oldest pubs in the city, À La Mort Subite, to taste kriek and half-en-half. 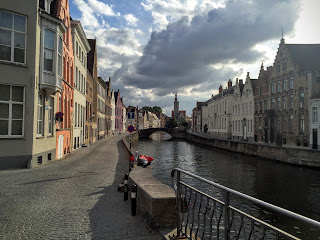 The next day, after having cereal and coffee in the apartment, I headed out to the Brussels center to go to Bruges.  I was not sure whether they will accept the electronic copy of the ticket and when I asked the ticket counter, the person at the counter told me to get it printed somewhere.  I decided to take a chance and got on the train just with the electronic ticket where no one checked for it.  Since it was Saturday, there was a lot of crowd with a bunch of people standing and traveling. 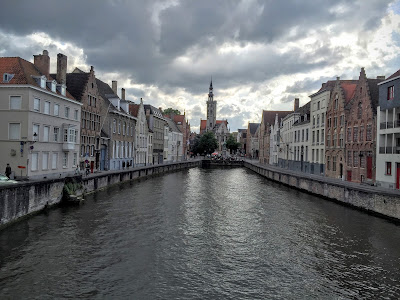 Bruges is a must see place if you visit Belgium.  The Tourist Information center will provide you with the map in the language of your choice and provide all the information that you need - very friendly people.  I walked on the side streets where there’re not many people around and enjoyed the quietness.  But after sometime, around noon, I couldn’t find any place there’s not a lot of tourists :-(  I walked around the city so much and enjoyed every bit of it.  Ended the tour of Bruges by going to one of the oldest bars in the city and having their local brew :-) 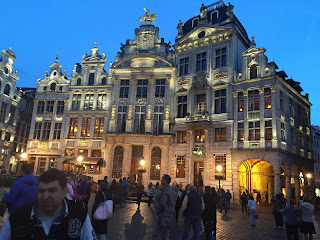 When I reached Brussels, I wanted to spend the evening at the Grand Palace and wanted to see the whole place light up.  They finally lit up the place at 10pm but til then I was enjoying the local scenery where the youth were sitting on the floor in the plaza and socializing and people of different cultures walking around the plaza.  This is a very nice place to hang around for people watching.